The landscape design for PARC 57 is not only an extension to the architecture but also a celebration of the rich heritage of Hanoi. It is a modern interpretation of a classical French garden where informal organic design seamlessly merges with strict geometrical lines and vistas. It is an oasis where modern living is juxtaposed with rich frondescence.
Set against a rich backdrop of abundant greenery, the landscape design revolves around three key features – the grand arrival feature, the central linear park and finally the expansive wetland park. Each of these three features are unique in their characters and contribute significantly to the disparate experiences the residents could enjoy.

The landscape experience begins with the grand water feature framing the entrance archway. Conceived as a key arrival feature, it is a large placid pool reflecting a grid of elegant trees that float on its silvery surface as slender green columns welcoming both residents and visitors. The entry experience is further enriched by an elaborate boundary wall delineated with vertical greenery and inspired by classical colonial aesthetics.

Past the grand entry feature and boulevard is the second key feature of landscape design – the central linear park. It is the active heart of the development connecting the two disparate water experiences – the formal entrance water feature and the informal wetland park. Primarily accessed through a sculptural feature trellis and interwoven with all the villas through a series of mews and garden paths, it is conceived as a series of rectilinear garden spaces to accommodate a reading deck, play court, exercise court, relaxation deck, BBQ garden and pavilion. Shaded with tree clusters, articulated with colourful shrubs and dotted with elegant benches it is place for both relaxation and entertainment. Further south, down the central walkway, a picturesque waterfront pavilion marks the end of this linear park and the beginning of a new landscape experience. It is at this point where its linear geometry dissolves into organic and free flowing edges of the wetland park.

The wetland park marks the southern edge of the development and it is a complete contrast in both disposition and experience from the rest of two key landscape features. Conceived as a constructed wetland and designed to evoke a natural feel it is a water garden of streams and reels sprinkled with landforms that float among these winding waterways. Soft green fringes with grasses and reeds disappear into the water blurring the edge between land and water. A couple of meandering boardwalks glide along this natural edge and a small bridge across to a floating island invite residents to be close to nature in the middle of the city among birds and butterflies. A solitary waterfront pavilion, inspired by villa architecture, acts both as a place for contemplation as well as a sculptural beacon glowing softly in the sea of grasses. 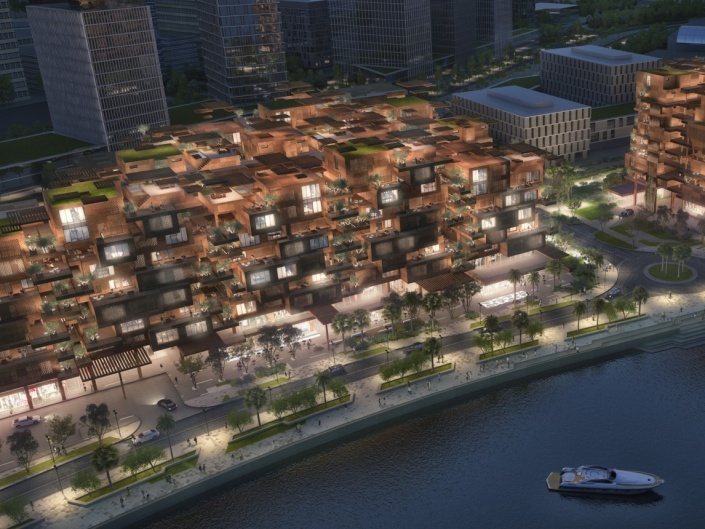